Published in Renaissance Magazine (US) June 2015. 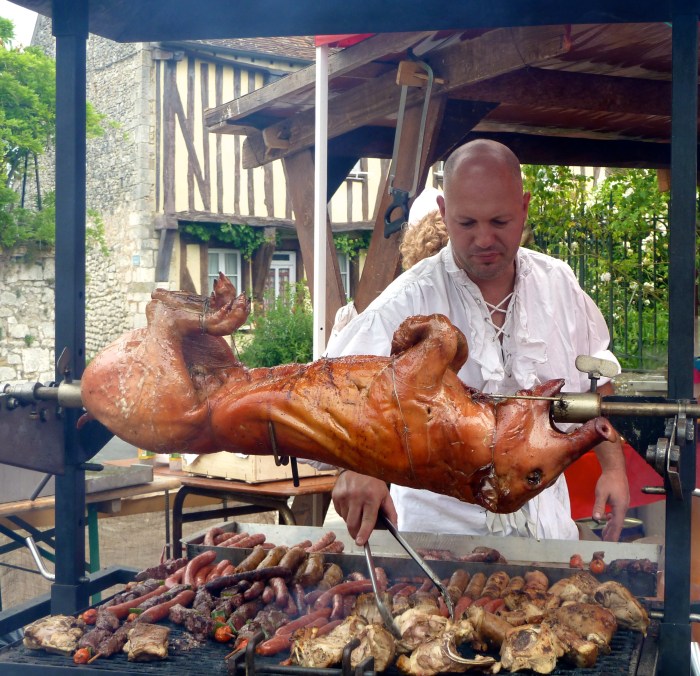 A whole pig roasts and crackles on a spit, while richly gowned maidens and weapon-laden warriors wait in hungry anticipation. One impatient warrior reaches for his sword and, for a moment, I fear that the meat will be sliced off the pig’s body right there and then. But this knight, it seems, is not looking for food or war; he is merely comparing his weapon to that of his companion and throws his head back laughing.

The town square is alive with dancers, minstrels, jugglers and troubadours and the enthusiastic crowd is refreshingly animated, dancing arm in arm in circles, under the summer’s fading light. Back-dropped against medieval stone and wooden houses, artisans continue to weave their wonders and traders are busy selling their wares. A man slowly pushing a heavy wooden cart full of sausage and cheese, dodges a dog that runs past him as it is chased down the cobblestone street by a pauper-looking child. You’d be forgiven thinking you are in 12th century France, but this is, in fact, Provins at its most authentic, hosting its annual summer fair, the largest and most exceptional medieval festival in the world. 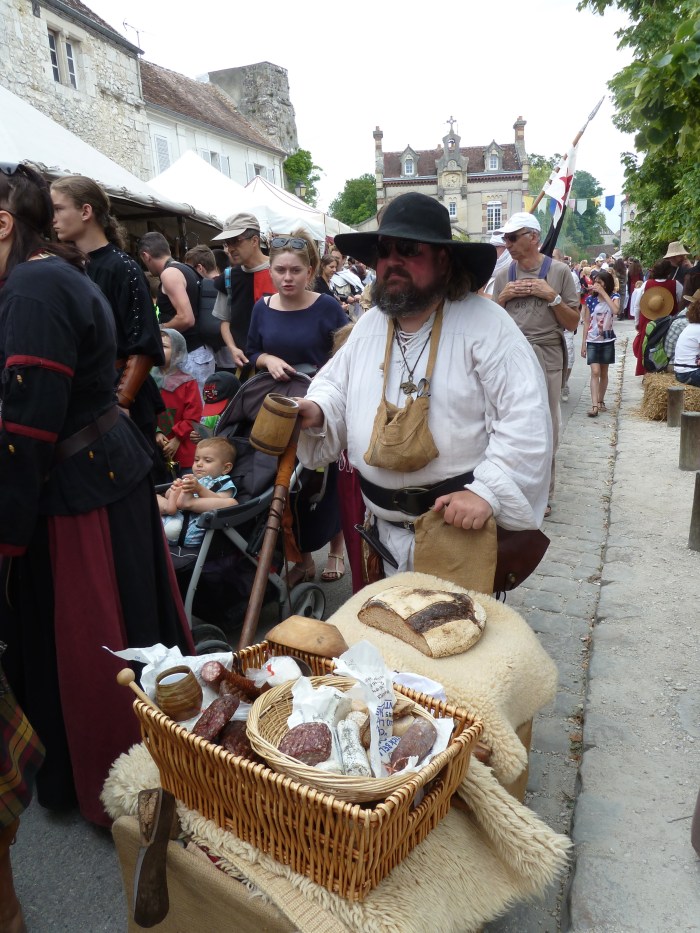 Each June, over 80,000 medieval enthusiasts are drawn to the magic of this unique, fortified UNESCO town that lies in the heart of the Ile-de France region, only an hour by car from Paris.  Here in Provins, its 12,000 locals famously join together to create an extraordinary re-enactment of the famous trade fairs of Champagne. In the 12th and 13th centuries, Provins was a highly regarded trading town, instrumental in international trade and wool fairs, drawing traders of wool, silk, spices and leather from Italy, Belgium, England and as far afield as Egypt. It seems this community is still doing the same centuries later, for tourists from all over Europe, UK, America and even Australia, travel to experience life in its most authentic form in the Middle Ages.

In a forest encampment, just behind the foot of the ramparts, two hundred artisans, all dressed in traditional medieval clothing and footwear, re-create the atmosphere of life 900 years ago, bringing an extraordinary authenticity to this fair. For this one weekend each year, they bond together and live life as a medieval community. Traditional white tents line the grass, ready for them to bed at the end of their trading day.  Groups of men and women sit engaged deep in conversation around long wooden trestle tables, absentmindedly fingering their wooden plates and spoons, while bread is baking on the heated earth, meat is being sliced off the bone and children play barefoot until the food is ready. 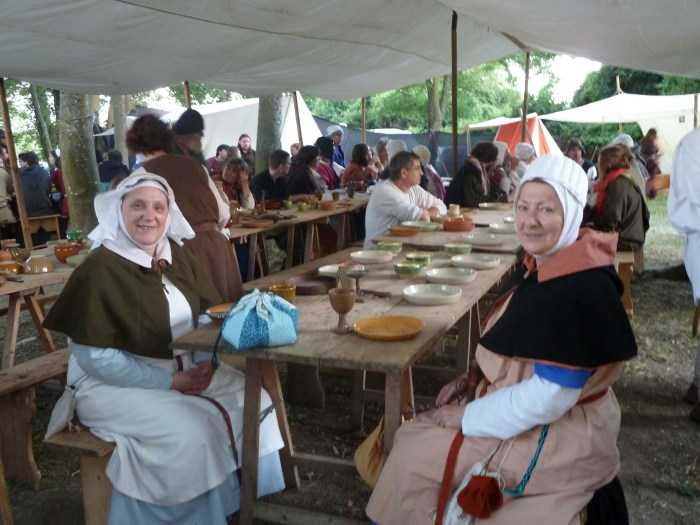 While these medieval artisans live life in the truest and purest sense, other travelling craftsmen are busy bringing their wares to Provins’ cobblestoned streets and alleys, tempting your every sense late into the night. There are richly coloured gowns, robes and tunics to buy and jewellery to try; calligraphists, blacksmiths and jugglers to watch; wandering minstrels and harpists to hear and the aroma of French food to bind all your senses together.

The Place du Châtel, in the heart of the festivities, is lined with restaurants, cafés and crepêries that will undoubtedly leave you gastronomically fulfilled. Or you can gift yourself the most authentic medieval food experience of all and head to Rue Saint–Thibault and down into the 12th century stone vaulted cellar of the Banquet des Troubadours, where you will feast with your fingers for three glorious hours on fabulous French food and decadent desserts carried on huge wooden trestles to your long benched tables by strong-armed men. While you devour this feast in loaned medieval clothes, jesters leap, acrobats tumble, musicians sing and fire-jugglers will mystify.

After being well-sated, walk back up into the sunshine and you’ll find the days and nights of the Medieval Fair have yet more to offer, for displays of chivalry and celebration abound.  Wander five minutes down Rue Saint-Jean and find yourself walking through and around the town’s impressive ramparts. Here you’ll experience The Legend of the Knights, an action-packed, re-enactment of Provins at the time of the King of Navarre and the Count of Champagne, when they return from their successful crusade. It is filled with equestrian stunts, knightly duels, maidens, princesses and chorused cheers from the excitable crowd.

Or discover the art of falconry, as once favoured by royalty, at the Eagle of the Rampart show where birds of prey soar high above your head and in the shadows of the fortified walls that loom directly behind.

But not all of the fair’s festivities are bathed in sunshine, for two of Provins’ most fascinating historical experiences lie deep below its cobblestones. The Tithe Barn is a 13th century, dual-level, vaulted stone cellar that the merchants of Toulouse used to store their goods. With the help of an unusually engaging audio guide, you can learn about the various traders that frequented these parts, interestingly from the perspective of those such as a scribe, a wool merchant, a medieval banker and a parchment maker. And once your eyes have adjusted to the dark, you can continue your subterranean adventures with a tour of The Underground Galleries, a labyrinth of secret tunnels that snake their way directly underneath numerous heritage protected homes and which over the centuries provided refuge to medieval pilgrims, paupers and secret societies.

This year’s Medieval Fair of Provins, to be held on 13th-14th June 2015, will showcase Childhood and Games in the Middle Ages. It is undoubtedly a once in a lifetime family affair, with food, fun and fantasy for all. There is free entry for those who dress medieval-style, with most of the attendees literally dressed to kill, as daggers, spears, swords and knives abound. But this is a friendly lot and you’ll not find a more authentic medieval fair, with a more authentic medieval backdrop, anywhere else in the world.